Home › How I Met Your Mother Quiz

How I Met Your Mother Quiz

Quiz: Which Friends Character Are You? 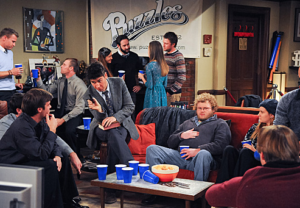 Everyone except Barney has lived here at one point or another over the nine seasons. Conveniently situated right above Maclaren’s Pub, it’s the number one social hub where parties like ‘Puzzles’ (why is it called Puzzles?) filled it to the brim. Initially, it was a post-uni lad pad for Marshall and Ted, never losing touch with its video games and ‘dude smell’.

The rooftop is for reflection and heartfelt moments; escapes when things get too much. As a testament to their closeness, everyone shared the same toothbrush for years before realising. The apartment has taken some battle wounds following sword fights, Barney punching the door, a burning intervention banner and a mace chipping the wall.

When all the dust has settled, Lily decided to begin married life in a new home and Robin sacred off after Ted professed his love to her. 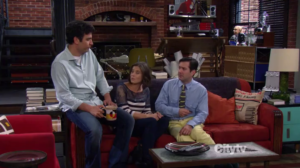 Towards the end of the series, Ted gets comfortable with the bachelor life, enjoying walking around naked and eating leftover takeaway. After Ted refuses to bungee jump off the Empire State Building, Barney locks him out of his apartment.

Trying too hard to impress his girlfriend Victoria, Ted gets sick of her ex, Klaus, overstaying his welcome. He finds out that Barney and Marshall have been dumping their old crap, calling it their ‘Clubhouse’. In classic ‘shmosby’ style, his apartment is trashed twice before his break up with Jeanette. 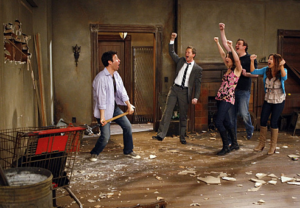 Ted often gets scorned for trying too hard in a city that doesn’t try enough. But it’s his hopeless romantic side that we’re rooting for from start to finish. One of his ongoing projects is to renovate a suburban house he bought for his future family to live.

But as romantic as his dreams are, life knocks him back when a tree falls on the house during a violent storm. He gets by with a little help from his friends who find joy in sledgehammering the walls during a renovation.

Finally, after four arduous years, he finishes the home renovations. He almost sold the house and moved to Chicago until meeting ‘your mother’ at a train station and raising a family. 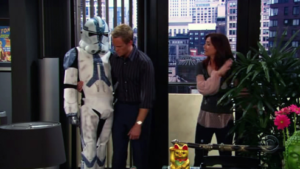 The Fortress of Barnitude and The Heart of Bachelor Country, this place needs no introduction. Barney’s lair encompasses all his nerdy, extravagant and downright questionable personality traits. A wardrobe of suits, which he calls his ‘family’. Lion’s head stonework bolted above his bed. The kitchen has a cardboard oven, as he never cooks.  A katana next to the couch and a life-sized stormtrooper. The list literally goes on.

Designed for one-night stands, it’s not surprising that the two women he settles down with have a problem with the creepy place. His first girlfriend, Quinn, is banned from using her own coffee cup, so she paints the whole apartment pink. Robin, who he eventually marries, just straight up refuses to live in his narcissistic paradise, and so they find somewhere else to live. 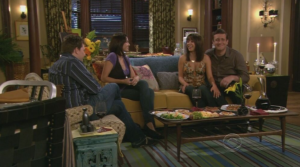 Committed, devoted, co-dependent. Some might call it sweet; others cringe as Marshall and Lily morph into a singular love blob. So, it was inevitable that they would one day move in together. After their wedding, Lily refuses to move into Ted and Marshall’s post-college apartment, which never lost its ‘dude smell’. Instead, they buy their own apartment fit to raise a family.

I would say they lived happily ever after, but they quickly discovered the floor was crooked. Robin capitalised on the situation by inventing a new game called ‘roller luge’. This involved skating down the floor wearing a colander for a helmet and riding a skateboard. Even in married life, the antics didn’t stop when Barney took a girl back to their apartment, pretending it was his house.

Quiz: Which Friends Character Are You?